Suit by suit summaries of a reading today compared to a reading a few weeks ago - post and pre Tower situation... Smiling that XVI gave way to VII... Laughing at how the XIX 🌞 has come out... But mostly thinking about the Ace of Pentacles not being on the scene with all the other aces... but a presence still felt nonetheless.
Detours and diversions...
Dagaz... Contemplating paradoxical truths and the integration of opposites...
I'm not one for reading the LWB but today because the book is in German and unreadable to me, I decide to throw a few words through Google translate and much to my amusement I lay down a "tarpaulin".
Many many thoughts on this... Smiling at how the little falling star wished upon becomes the big XVII Star... Smiling at how the buried pearls are released to birth a new galaxy... Smiling at a brief text received recently - a few short, simple words that felt gravid... Though those are neither my words nor story to tell...
Experimenting... #alcoholink #yupopaper
Quietly smiling to myself... I photographed the 5 of Cups, partly because I'm too lazy to write coherent notes, partly because even when I do write notes, I can rarely read back my own handwriting, but mainly to lock into place the lengthy conversation I had with Mr S, which put a whole new slant on the interpretation... Quietly smiling at noticing the ray of light coming down from the V to bathe the back of his head...
Not sure what this critter is but it's spent a good few hours hanging out with me today... 😁
A good day for contemplation and divination in the garden...
A couple of jumpers... Spotting something that prompted an 'I wonder if...' A rummage through the deck... Cards laid down and memories of a vivid dream from a year or so ago... A big smile at there being no such thing as an idle shuffle... And an even bigger smile as I think to myself, sometimes you don't need to ask questions, you need to be reminded of answers you've already been given... 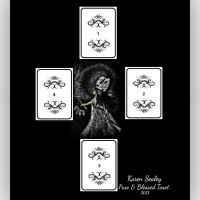 My intention this morning was to move on to another card in the D.O. The card has been chosen, the story lags behind and tells me it wants another day to brings lines into order. I decided OK, let’s take a break but then this story from 2 years ago today appeared in my time line memories and it’s a story that often makes me smile and so I thought I would share it here.

I read cards for very many people in very many places and every so often things happen that you know you’re going to remember for a very long time and smile often about… tonight was one of those nights… So I’m reading at launch party for a new business office and I notice a guy who keeps peeping across the room. Eventually he comes over to the table and says- ok… I’m curious… what do you do? I tell him I just make up stories and he laughs and says great, that’s what I do for a living too! I hand him the deck and he pauses and says… yes…I’m very curious, I’m curious about the cards but I’m also curious about you and I wonder what you can tell me before I turn over the cards… Hmmm, I say and I smirk as I see the way he instinctively shuffles and his hands move without a downward glance and the cards dance into graceful glides… I say… ok… you’re either a poker player or a magician… what’s your hustle? He laughs and tells me that he used to do card tricks so I challenge him to amaze me… He fans the cards and tells me to pick a card…pick any card… look at it, memorize it and put it back… He leads me through elaborate rigmarole until ta dah! IS THIS YOUR CARD! Why yes! Yes it is! 🤣🤣🤣 I then take him through his first ever tarot reading and he’s completely fascinated… his P.A. is sat next to him and he turns to her and asks her what she makes of it all… She laughs and says omg she knows more about your life than I do! He looks at me and says… you know… I thought this was a parlour trick but there’s something to this… what’s going on? I laugh and say I told you… I make up stories… He says yes but this is my story! How do you tell MY story? Ok… now keep this a secret but magician to magician, it really is very simple… I just found your cards… 😘

14 thoughts on “When Magicians Meet”